15 Common Signs and Symptoms of Fibromyalgia

What Are the Symptoms of Fibromyalgia?

Fibromyalgia affects more women than men, and this disorder can strike you at any age.

Fibromyalgia is a categorized by widespread pain throughout the body, among other symptoms which vary from person-to-person. 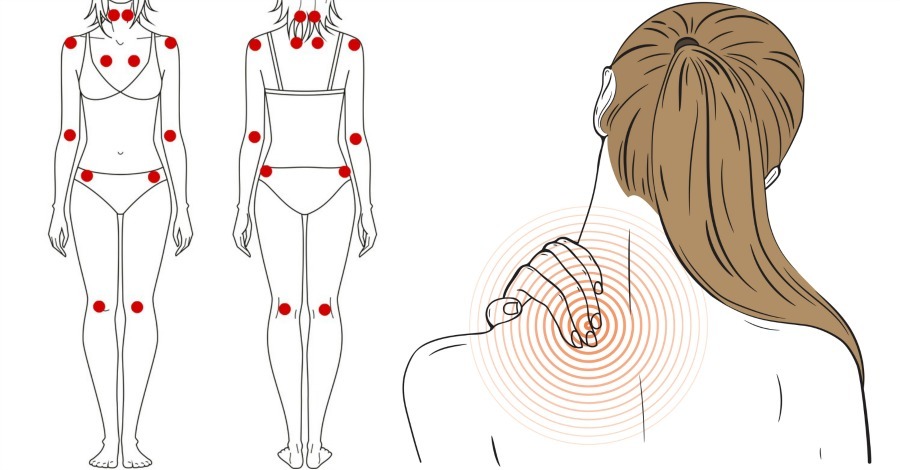 Although much is still to be learned about this medical condition, frequent research leans towards the possibility of Fibromyalgia symptoms arising due to changes in how the patient’s brain processes different pain signals in their body.

For a lot of people, Fibromyalgia starts to occur shortly after a physical or psychological trauma – even after periods of extreme stress. But some also develops symptoms gradually over time with no known triggers. Fibromyalgia symptoms can fluctuate each day to day, and some may experience long periods of remission or lessened symptoms.

Although Fibromyalgia has no definitive cure, it has treatments that aim to focus on stress relief strategies and pain management for easing its symptoms.

Many are now successfully treating Fibromyalgia symptoms with a grain free, sugar free. and chemical free diet. The thought is that symptoms are alleviated as systemic inflammation is decreased.

Below are the 15 common signs and symptoms of Fibromyalgia Disorder

Check yourself if you have these Fibromyalgia signs and symptoms: 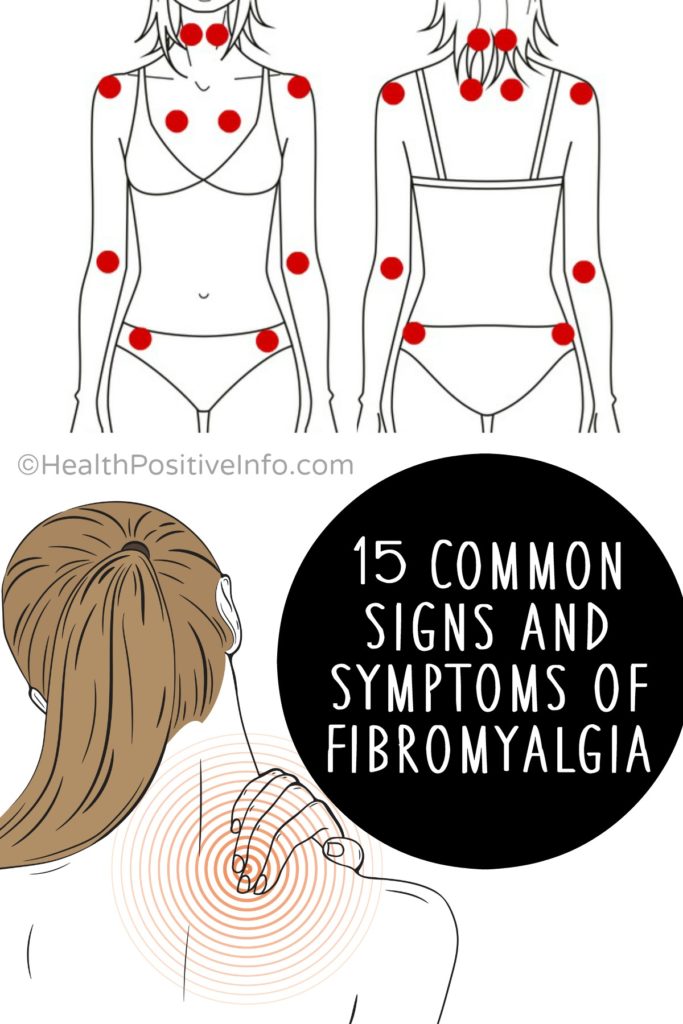 The distinctive symptom of Fibromyalgia is widespread pain.

In order to be classified as Fibromyalgia pain, it must be widespread – specifically it must occur either (a) above and below the waist or (b) be on both sides of the body.

Also common is that specific trigger points (also called tender points) when pressure is applied, cause the pain to spread to other parts of the body.

There are 18 of these tender points (9 on each side) and they include:

Generalized joint pain and stiffness are also common, especially after sitting for an extended period of time and/or upon waking in the morning.

Perhaps one of the most debilitating symptoms of all is the anxiety and depression that often accompany Fibromyalgia.

Most Fibro sufferers will tell you that they experience periods of anxiety and/or depression that tend to worsen with the severity of Fibromyalgia’s general symptoms.

Medical researchers are still trying to figure out if mood disorder symptoms are separate from Fibromyalgia’s symptoms, or whether they occur because of Fibromyalgia’s highly disruptive symptoms. In all likelihood, systemic inflammation plays a role contributing to both.

Sleep disruption is a symptom that accompanies Fibromyalgia. This includes both trouble staying asleep and falling asleep as well as insomnia. The cycle builds upon itself, worsening symptoms of chronic fatigue that already exist with Fibromyalgia.

Chronic and severe fatigue might be one of the most common complaints of people with Fibromyalgia. The fatigue can be so severe that performing even your most basic every day tasks can be difficult.

A debilitating inability to focus or concentrate, in addition to memory lapses, is a known symptom of Fibromyalgia. It is referred to as Fibro fog. It is not that memory is gone entirely, but recall and general cognitive abilities are slowed, and remembering simply things may be difficult. Likewise, paying attention and focusing are also cumbersome.

It is not unusual for Fibro patients to have troubles with balance. Likewise, dizziness may be present. In addition to other symptoms, if balancing is becoming an issue, and falls are happening, this could indicate Fibromyalgia.

Random tingling and numbness in your face, feet, legs, hands, and arms without any known causes can also indicate this condition. Unfortunately, it is also common for people with Fibromyalgia to experience Carpal Tunnel Syndrome as well.

Fibromyalgia can also have cardiac-related symptoms despite having no underlying cause.

Over fifty percent of people diagnosed with Fibromyalgia have chronic migraines classified as severe, and happening at least 3 times per week with multiple headaches in a single day for many. Less severe tension-type headaches are also common.

When you have Fibromyalgia, you can often feel as if all your senses are in overdrive. This includes bright lights, strong smells, sounds, and foods. Symptoms, including headaches, may be heightened by certain stimuli.

You may notice you are more easily impacted by medications, vitamins, foods, and caffeine.

Blurred vision, difficulty focusing when looking at something, and dry or burning eyes are some of the ways Fibromyalgia can disrupt your vision. These disturbances are often accompanied by headaches.

Temporomandibular Joint Dysfunction, TMJ, is a disorder that affects about one-fourth of the people suffering from Fibromyalgia. Facial pain starting from the jaw may spread also to your head or neck, and usually this pain is in the muscles and ligaments within your jaw area rather than its joints.

The majority of people diagnosed with Fibromyalgia also have irritable bowel syndrome which includes abdominal pain, diarrhea, bloating, constipation, and even nausea.

Generalized digestive disorders are very common in Fibromyalgia patients. The diarrhea and constipation can alternate.

Most of us are not aware how devastating these symptoms of Fibromyalgia can be for its patients, and cure for the pain is not available, though manageable.