How to Deal with Criticism

Criticism is never fun, whether it’s coming from a well-meaning English teacher or from your arch frenemy. If the criticism is meant to be constructive, then you can use it to become a more well-rounded person. And if it’s only meant to harm you, then you can work on shaking it off like a bad habit. So how do you deal with critics? Read these steps to find out. 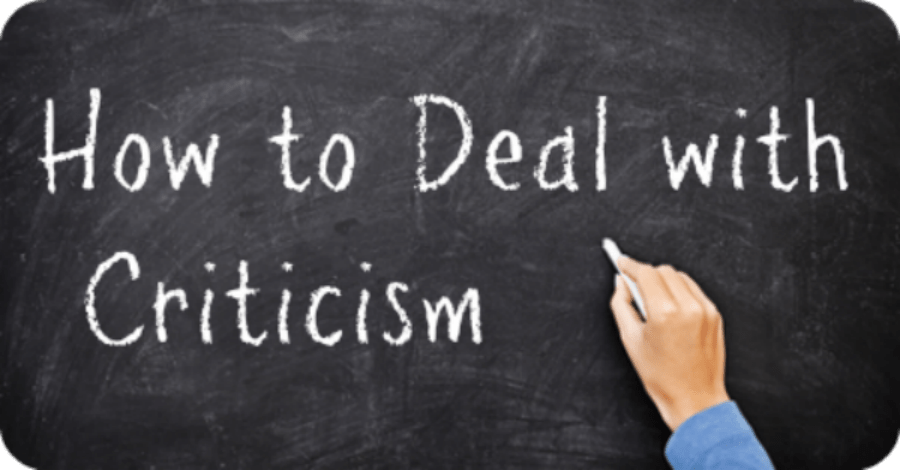 Critics or criticisms at home, in the office, or in your relationships could be unjust, unfair, harsh, negative, constant, constructive, destructive. Here are some tips on…

How to Deal With Criticism:

(How to Deal with Criticism at Work/ in the Workplace, Most Especially*)

Know the difference between destructive and constructive criticism. It is critical to know where the feedback is coming from and to understand the intentions of the person who is giving it to you. The first step in dealing with criticism is to determine whether the other person has your best interest in mind. If it’s a teacher or a superior, then chances are the person only wants you to perform better.

Accept that you’re not perfect. This is a great way to deal with criticism. Every person has flaws, and if you don’t see any of yours, then you’re not analyzing yourself as closely as you should.

Don’t take it personally. You simply can’t take it personally. If your boss says you’ve been a little less productive than usual lately, it’s not because he thinks you’re fat and lazy; it’s because he wants you, his employee, to step up your game. If your best friend says that you have a tendency to zone out when she’s talking to you, don’t think that she’s calling you a horrible friend or a zombie; she just wants you to communicate a little better.

Work on being less sensitive. Work on accepting your flaws and being able to hear about some areas where you can improve. If you never improve, then you’ll be flatlining, and no one, including you, wants that. Try to focus on the message and its intention to help you. When we respond in a sensitive way, it’s usually a defense mechanism. Do your best to recognize this.

Understand what you’re really being told. If you want to deal with criticism effectively, then you have to understand the message being conveyed. If you’ve determined that the criticism is meant to be constructive, then you have to break it down so you can start figuring out what to do next.

Evaluate the truth to it. If the feedback is coming from a person who has your best interest in mind, then you have to consider the possibility that there really is something to those words. Take time to consider your plan for addressing their comments or response.

Make a game plan for addressing it. Okay, you’ve decided that your English teacher, boss, boyfriend, or best friend is completely right, or at least somewhat right. Now, you’ve got come up with a plan for what you want to work on.

Thank the person for being honest. If you have received some criticism that was delivered in a friendly and helpful way, or just in a way that was meant to be honest and clear, then take the time to thank the person and to say that you appreciate the fact that the person told you something that can make you an even better friend, girlfriend, student, or professional.

Stop interrupting and making excuses. If someone is giving you valid criticism, stop making excuses for why that person is completely wrong, especially if you know that there is some truth to what he or she is saying. If you get defensive and make excuses, then the person won’t be able to finish telling you exactly what he or she means, and you won’t get the information you need to really improve. It’s natural that we feel defensive, but it’s important to hear people out before you cut them off to prove you’re perfect.

Remember that constructive criticism can make you a better person. Sure, it’s tough to deal with even the most well-meaning criticism, but if you’re so invested in being an awesome person, then remind yourself that being aware of your flaws and shortcomings and making a plan for addressing them will make you an even more amazing person.

Understand the person’s true motives. If you have recognized the criticism as completely destructive and hurtful, then you can think about why the person might have said such a thing. This type of analysis can help you feel better.

Look for the grain of truth. Okay, so maybe the criticism was delivered in a way that was completely mean, unnecessary, and hurtful, and most of the things that were said were way off base. Maybe your co-worker said you were “a complete mess” or your friend said you were “totally selfish” for what you think was no reason at all. Take a minute to think about it, though: do you need to brush up on your organizational skills? Have you been known to be a little selfish from time to time? If so, then maybe you should reconsider your actions without getting hurt by the way the criticism was given.

Remember these are just words. What was that thing your mother told you about “sticks and stones” not being able to break your bones? Sure, you thought it was stupid in third grade, but now, you’re a lot older, and it’s starting to make sense. In the end, destructive criticism isn’t made up of bullets, swords, or atomic bombs — it’s just a series of words connected together in a way designed to make you feel terrible. So, remind yourself that criticism only consists of a bunch of words. And that the destructive person’s opinion on you don’t actually matter.

Stay confident. The most important thing you can do is maintain your confidence. No matter what people are saying about you, you have to stay strong, remember who you are, what your strengths are, and don’t let other people influence your own self-worth. Being confident doesn’t mean you’re flawless, but it does mean loving who you are.

Adapted from How to Deal with Criticism.