The Difference of Just One More Hour of Sleep

Did you know that each year when we “spring forward” at the beginning of Daylight Savings Time, heart attacks and car accidents spike? Productivity, performance, and concentration are also significantly disturbed. Losing just an hour of sleep might not seem like a big deal – many of us do this regularly and without a second thought – but the truth is that the impact is quite major. 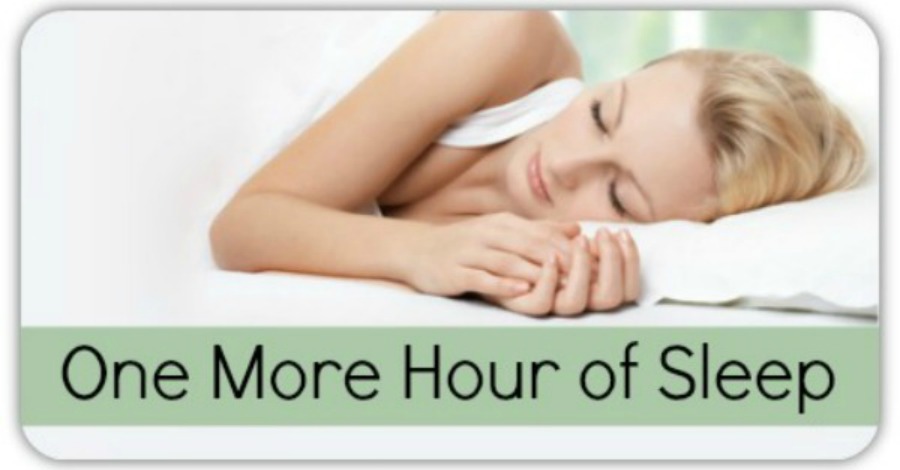 Do You Lose Sleep in Spring? Do You Gain an Hour of Sleep in Fall?

Your hours of sleep matter. Scientific Studies show that:

You might now be wondering what happens when we “fall back” and gain an hour. Well, indeed the opposite happens – heart attacks and car accidents decrease when we gain some time to rest.

The effect of daylight savings time clearly indicates that sleep is not a luxury, but rather a necessity impacting our physical health, brain function, and safety. And if just one hour of sleep deprivation one night of the year can have such a marked impact on people, what about the constant and chronic sleep deprivation people endure regularly?

Sleep deprivation is epidemic. Our society sleeps less than ever before – fueling instead on caffeinated beverages and squeezing in extra time being “productive” in lieu of sleep.

The impact is probably much larger than you think!

The Effects of Sleep Deprivation

Brain imaging studies performed at the University of California, Berkley and Harvard Medical School demonstrate that “while a good night’s rest can regulate your mood and help you cope with the next day’s emotional challenges, sleep deprivation does the opposite by excessively boosting the part of the brain most closely connected to depression, anxiety, and other psychiatric disorders.”

In a study performed at the University of Surrey’s Sleep Research Centre, people who slept six-and-a-half hours at night versus seven-and-a-half-hours had an increase risk of diabetes and cancer.

The opposite was true for people who slept seven-and-a-half hours; their risk of diabetes and cancer decreased.

Even just a small amount of sleep deficiency affects our ability to think properly and respond quickly to situations that present themselves throughout one’s day.

Research also shows that memory is deeply affected by lack of sleep because critical to our ability to retain things we learned during the day is the need for sleep both before and after learning.

Over time, inadequate sleep will also wear at the immune system, making you more susceptible to infection.

Sleep is important in regulating appetite, energy use, and weight. When we sleep, our bodies produce leptin, an appetite suppressor.  Likewise, our production of the appetite stimulant, grehlin, decreases when we sleep.

When we do not get adequate sleep, we produce less leptin and more grehlin which makes us hungrier while we are awake. Further, studies show that a lack of sleep causes a significant increase in the desire to eat high-calorie foods. Our bodies literally shift into a desire for weight-gain.

Also worth mentioning is the mere fact that we simply have more waking hours to eat when we sleep less.

Studies demonstrate that our cardiovascular health is impacted by inadequate sleep. According to the Journal of Sleep Research, blood pressure levels improve when people with hypertension get more sleep.

Further, the Coronary Artery Risk Development in Young Adults (CARDIA) study found that healthy middle-aged people who get enough sleep each night are less likely to accumulate calcium deposits on their coronary arteries, which contribute to heart disease. This study showed that just one extra hour of sleep at night is associated with a 33% reduction of the risk of coronary artery calcification.

This is just a small sampling of the detrimental effects of a lack of sleep and I hope I have convinced you of just how important sleep is to your health and how you feel.

If you are ready to assess whether you are getting enough sleep here is a guide from the National Sleep Foundation as to just how many hours of sleep we need:

It should be noted that there are a lucky few who have a mutated sleep gene – the hDEC2 gene – allowing them to get by with just six hours of sleep per night. This gene, however, is present in less than three percent of the population.

Are You Sleeping Enough?

Ying-Hui Fu, Ph.D, neurology professor at the University of California, San Fransisco suggests that adults need about 8 – 8.5 hours of sleep per night. She says that the average American sleeps 7.4 hours on non-week nights and less on week nights.

Unless you have mutant genes, regardless of what day of the year it is or season, if you’re not sleeping enough, shoot for seven to nine hours.

Wishing you many peaceful nights and sweetest dreams.