Does Dairy Cause Acne? The Dairy Acne Connection

What’s the Connection Between Dairy and Acne? 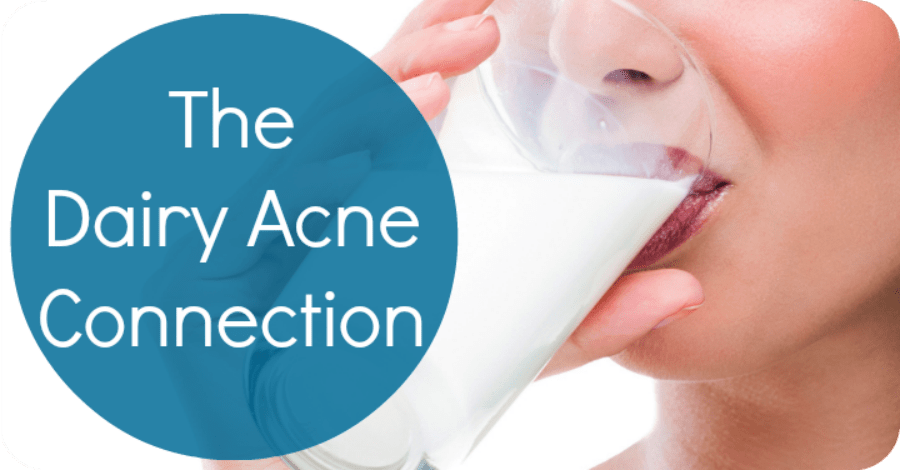 There is quite a bit of anecdotal evidence but not enough empirical evidence for the medical community to make a declarative statement that there is a connection between dairy consumption and acne. There are many doctors that have, however; and bottom line is that the theory makes sense and seems to be real.

Does Dairy Cause Acne?

It is proven that food sensitivities and allergies can cause skin eczema.

Really now, how much of a stretch can it be that there may be a causative association between dairy sensitivity and acne? Our mainstream medical community says it is not good to rely on what is commonly referred to as “old wives tales” to establish a treatment regimen for any malady or disease, however the preponderance of the anecdotal evidence is strong enough for the wise to take heed on this occasion with the dairy acne connection – to take heed enough to at least investigate the claim, and for some of us out there, enough to follow the claim and see results!

Why Does Dairy Cause Acne?

Maybe you are familiar with what Canadian dermatologist Dr. F.W. Danby began to discover when he investigated the possible association of hormones in milk products and acne.

Most of us know about the added hormones that cows are supplemented with, but many of us have not taken a sec to stop and think that cow’s milk is from a lactating bovine that is hormonal to begin with because she is lactating!

Though the word “cow” is used in general speech to define just about any bovine, it is a specific term. Milk comes from cows that are female bovines which are lactating due to the birth of a calf, and in many cases because they are given additional hormones to help them lactate more or longer. That is why they are lactating and what they lactate is what we call “milk” and is what we drink and make many other products from.

Proof of the Acne Dairy Connection

Some take anecdotal evidence and do something such as to completely stop ingesting cow’s milk in any form. Then, empirical proof (at least for them) is discovered that the dairy was indeed the cause of the acne. Big medicine and all of the studies doesn’t matter then. (Good for them to take charge of their own health!)

Unfortunately, the truth is that most medical doctors still do not receive adequate training in nutrition to even notice a causative factor of just how much diet influences health on a more immediate level. Other cause/effect relationships noticed by the public at large are generally ignored by big medicine. Food intolerance is something that is commonly overlooked by mainstream medical doctors. It is not because big medicine doesn’t want to get people healthy, but for them there needs to be proof. Even just for the sake of liability, there needs to be proof.

Medicine also progresses because of income. Pharmaceutical companies that do the big research studies will not do a study without a valid financial reason. There needs to be a strong indication that a disease process is actually occurring, and the hope of developing a pharmaceutical to treat it. And, truth be told, there isn’t any money in just telling people who are sensitive to avoid the offending food!

If dairy products are proven to be a cause of acne for many who suffer from it, there is no profit for any company in big medicine to just tell people that there is a connection and to just avoid dairy.

So if you have any thought whatsoever that dairy may be the cause of you or someone you know having to suffer acne, then follow your gut (pun intended) and cut out the dairy for awhile.

While there is not enough empirical evidence to support the fact that there is a connection between dairy intake and acne, there is some scientific evidence and enough, in my opinion, for those who suffer with acne, to at least try it out.

Here are some facts we found in researching the dairy acne connection:

The Connection Between Acne and Dairy

What to Do to Reduce Your Acne Caused by Dairy

If you believe you have acne caused in whole or in part by dairy consumption, the solution could be easy. Cut out the dairy and see what happens! This is by far the least expensive way to clear up acne if dairy is the cause. No money spent on infomercial products promising to clear up those blemishes. Not even any money spent on dairy products since they will be avoided.

If you decide to do this, be sure to cut out all of the dairy in your diet in order to truly see if your acne clears. Look for words such as “whey,” “lactose,” “casein,” “caseinates,” “butter,” and “cream” on the labels of the foods you eat. Sensitivities to dairy can be caused by any or all components of milk. Be sure to ask your healthcare professional if you should take a calcium supplement to replace the amount of calcium you will lose from not consuming dairy. In most instances, eating enough of other foods that are rich in calcium will suffice.

Lastly, if you eliminate dairy, you may experience dairy cravings for a short period of time following the initial elimination. If you see that your acne is being caused or worsened by dairy consumption, there is likely an array of dysfunction occurring inside your system as well. If your acne clears from eliminating dairy, you may notice you feel better overall and that would be another great effect. At that point, in the face of dairy craving, I believe it is truly important to keep our personal philosophy in mind: Nothing tastes as good as HEALTHY feels.