Soy as an Alternative to Dairy: Benefits and Dangers

Some believe that 60 percent or more of Americans are intolerant to dairy. Dairy is a mammalian milk. The word mammal derives from the fact of mammals having mammary glands. Sure, milk is a super food for the baby cow it was intended for, but it is hit or miss for humans as far as whether or not it can be tolerated without any manifestation of symptoms indicating intolerance. 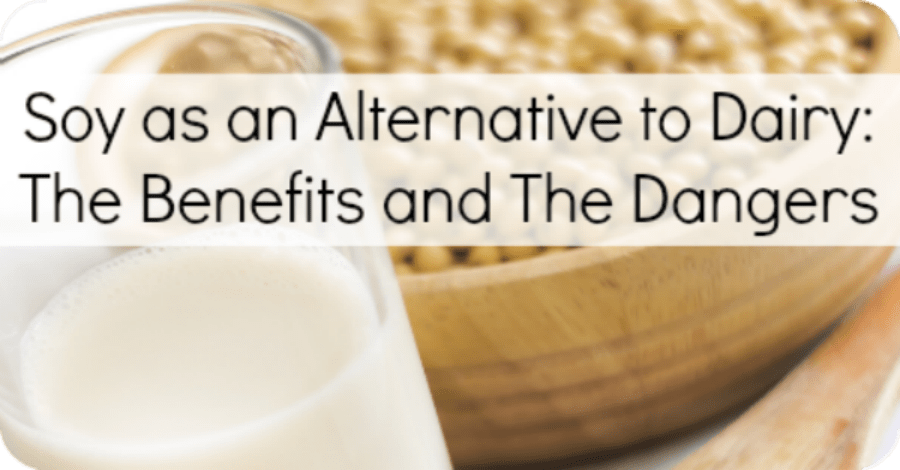 Fortunately there are Dairy Alternatives. The ubiquitous soybean, as it appears in its varied processed forms, is a viable alternative to milk products. And it does taste quite good too!

In fact, many soy products are delicious. Of course, taste is subjective and varies as much as the number of people who are tasting something. Texture of foods, as far as the human palate is concerned, goes just as far as true flavor when it comes to how we perceive taste.

Soy products are a decent alternative, being that they can be quite tasty and contain protein and calcium, but are not without issue themselves because some people are intolerant to soy products.

As a quick side-note, the reason why when embarking on a dairy elimination diet to determine if one is sensitive to dairy products, it is not a good idea to substitute soy during this time. If one is intolerant to soy as well as dairy, then when substituting soy for dairy, this will interfere with the true results of the dairy elimination test. Wait until the offending foods that cause sensitivity are absolutely identified before introducing new alternatives into the diet such as soy.

Is Soy Good or Bad for You?

Now, there is a considerable amount of argument both for and against consumption of soy products by humans or animals. Rather than comparing studies of which the data can be manipulated on both sides, let’s consider some fundamentals instead. First, no single food product should be consumed in huge amounts. Remember the sage advice of balance and moderation?

There are some people who are happy to drink a half-gallon of milk per day along with consuming eight or more ounces of cheese, plus consume other milk-based products such as yogurt and ice cream. They just love their dairy products! And while, not recommended, they may feel fine consuming dairy. For others, though, it’s different.

The United States Department of Agriculture Food Pyramid Guideline’s recommended daily intake of milk products is three 8 ounce glasses of milk total (as combined with milk, cheese, yogurt, ice cream, and other dairy products). A half gallon of milk is 64 ounces.

Over indulgence of any food may cause symptoms of intolerance that would not otherwise occur if the food was consumed in normal amounts. The same would go for the consumption of soy products. Just because a food item is promoted as being healthy does not mean that more is better.

Agricultural Methods and Processing of Soy

Next, another issue with soy products that may be the cause of the negative study data that raises health concerns among some groups is the source of the soybeans that products are made from.

The sheer quantity of food consumed every single day in the Unites States makes it impossible for product suppliers to only choose locally/organically grown soy as the main ingredient for their products. Soy imported from foreign countries (as well as soy grown and processed in the United States) can be of much varied quality and may even contain harmful chemicals from processing or insecticides.

Serious issues with imported foods are not new to the American consumer. Remember the news stories about imports from China? Unfortunately, China isn’t the only country that may have much less stringent requirements for human grade food products.

Adding to the fray of concern about soy is the genetic makeup of the plant itself. Plant hybridization has always occurred whether in the wild or at the hands of man – plants scientifically modified at their genetic level by man.

Genetically Modified Organisms (GMO’s) are organisms that have been manipulated by man to add or take away a plant trait within the plant’s genetic code. Maybe the scientist wants to make a plant more resistant to disease; the scientist will experiment by splicing genetic code from other organisms into the test plant to produce the desired result. Even if the desired result is obtained, there is no way to be certain without extensive testing as to what the change on the genetic level may cause, when the plant is eaten by humans.

This is not to say that we should fear what science is attempting to accomplish with our food supply. Truth be told, if it wasn’t for scientific developments concerning our food supply, many more people would go hungry. Also of note is that if it weren’t for GMO’s, there would be no modern forms of insulin for diabetics who are dependent on it to live. Recombinant DNA technology of modifying E.Coli bacteria so that it produces human insulin is saving the lives of insulin dependent diabetics everywhere.

On the other hand, this also does not mean that we should abandon all concern and just hand over our health to the will of scientists who are trying to improve our food sources. This goes back to the balance and moderation advice with some common sense thrown in.

It is not fully known whether GMO soy can be harmful for human consumption, and if so, what the exact implications are.  There are very few studies on this issue and many see environmental impacts from the production of GMO foods. Many believe that GMO foods promote disease as well as allergic and intolerance reactions in some as well.

One other big concern about soy is the amount of processing it takes to manufacture certain soy products. The lessons from doctors all over the world who preach to us daily about eating less processed foods seems to be lost in the arena of the so-called healthy soy products.

Unless one tours the production facility of a product one wishes to consume, there will be questions as to exactly how the product was made. Were there high amounts of heat used to make the soy milk one is planning to pour over a bowl of cereal? Were there chemicals used to extract or combine components to make that glass of soy milk one is about to drink?

Fortunately in the United States we can find out a huge amount of information about the foods we eat just by making a few inquiries by phone, mail, or email. So this brings us to a very basic fundamental in that each of us should be better informed as to the source of every food we stick into our mouths.

In considering replacing dairy products with soy products, or when using soy milk vs dairy milk, consider the following:

1. Could I be sensitive to soy as well?
2. Where does the soy in my chosen soy products come from? Is it a GMO?
3. Depending on the product, soy may require significantly more processing than milk. How was my product made?

But don’t let the calcium content be the only deciding factor of consuming soy as an alternative to dairy, nor let the fat content be a deciding factor to avoid soy. Studies have indicated that soy calcium is not as readily absorbed as calcium from milk, but there are other studies that indicate that it is. And the fats are plant fats not animal fats.

Here we go with that data manipulation again as well as having another chance to consider balance and moderation.

The bottom line is, become informed and do what is right for your body. And as always, seek the advice of a healthcare professional before making dietary changes. If there are already concerns of dairy sensitivity or dairy intolerance with you, it would be wise to only add new foods such as soy based food products slowly and over time.

Although we want to move full speed ahead, our bodies may just not be up to it.