Dirt Is Good for Us

Dirt Is Good for You

Did you know that dirt is good for us? Yes, dirt is healthy, mainly.

We all know that bacteria has had a bad reputation. Parents keep immaculate houses in attempt to eliminate the “threat” of bacteria, removing shoes indoors, washing hands with anti-bacterial soap, mopping with disinfectants, cleaning the counters with bleach, etc. All of this is not only unnecessary for health, but extreme measures at germ avoidance can be harmful to the immune system. 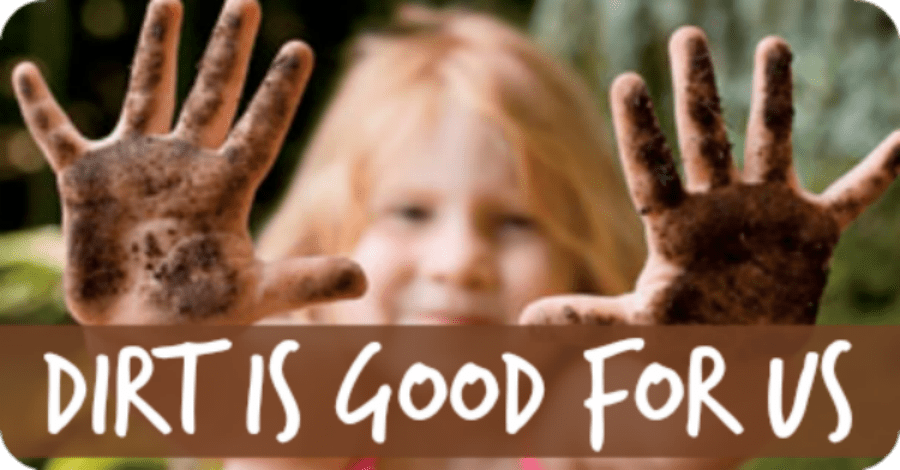 It’s surprising just how many health benefits there are to getting (and staying) dirty. So, is dirt good? How good is dirt for you?

Why Dirt Is Good

There are all sorts of beneficial bacteria living in dirt, but one that has been well researched is called Mycobacterium vaccae (M. vaccae). This bacteria has been shown to allay depression.

It is not entirely clear why but researchers have found that contact with the bacteria releases cytokines which activate the nerves in our bodies to relay signals to the brain and release serotonin into the prefontal cortex – the part of the brain involved in mood regulation (exercise has been shown to have similar effects).

This same release of serotonin that occurs when playing in M. vaccae laced dirt, has also been shown to improve cognitive function.

The serotonin that is released whilst playing in the dirt temporarily boosts IQ so that learning is facilitated.

Staphylococci bacteria often get a bad rap but it has it’s benefits as well and it exists for a reason.

Staphylococci can prevent inflammation. After an injury, if staphylococci is present on the skin, the redness and swelling, which often accompanies cuts and scrapes, can be prevented.

Dr. Weston A. Price noted in his book Nutrition and Physical Degeneration (one of my favorite books on earth, by the way) that clay was “the treatment used by several primitive races for preventing and correcting serious disturbances in the digestive tract. This consisted in the use of clay or aluminum silicate which modern science learned has the important quality of being able to adsorb, and thus collect toxic substance and other products…” He also noted a common thread running through all of the primitive cultures he studied – that they carried clay in their backpacks.

Clay isn’t found in every dirt mound, but it always seems that kids are magnets to it. It lays deeper in the soil and is sure fun to play with and is definitely healthy or good for health.